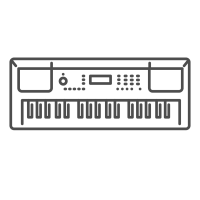 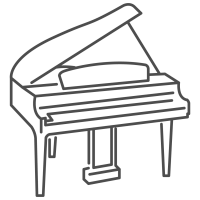 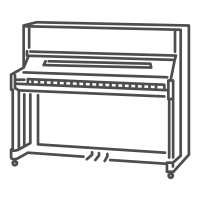 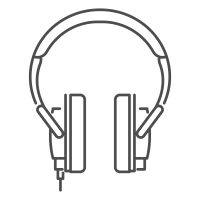 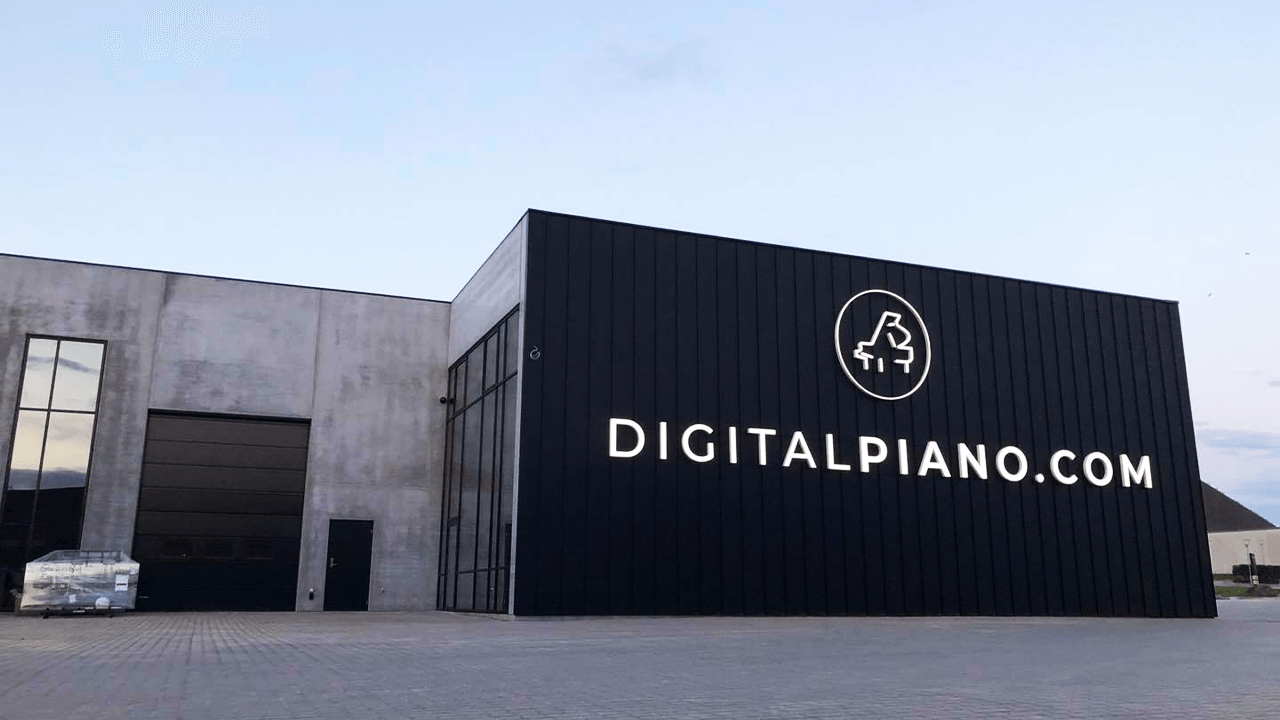 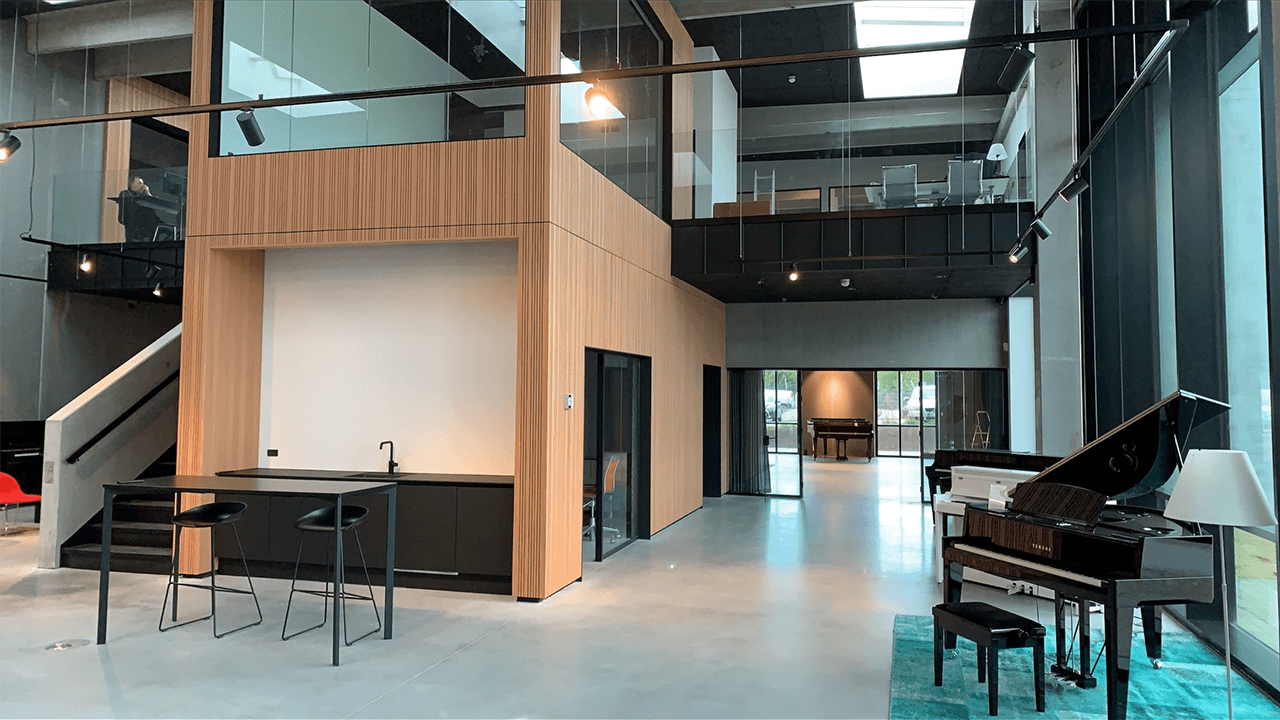 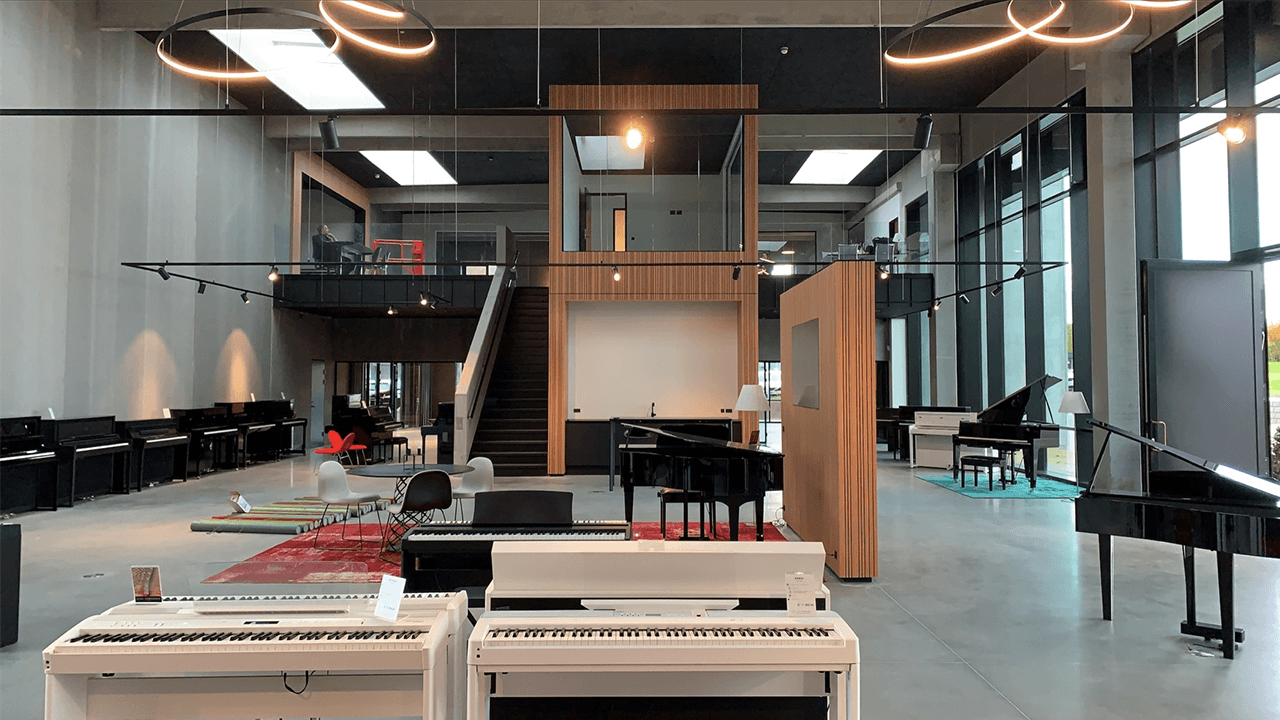 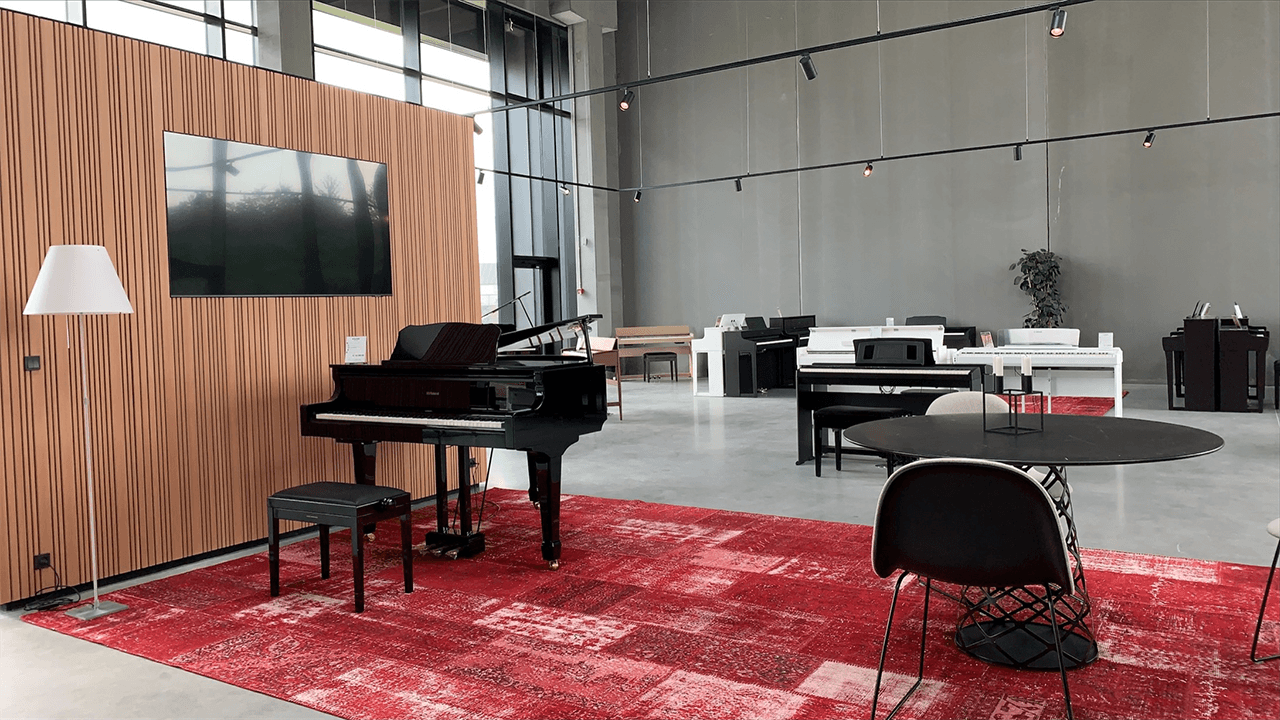 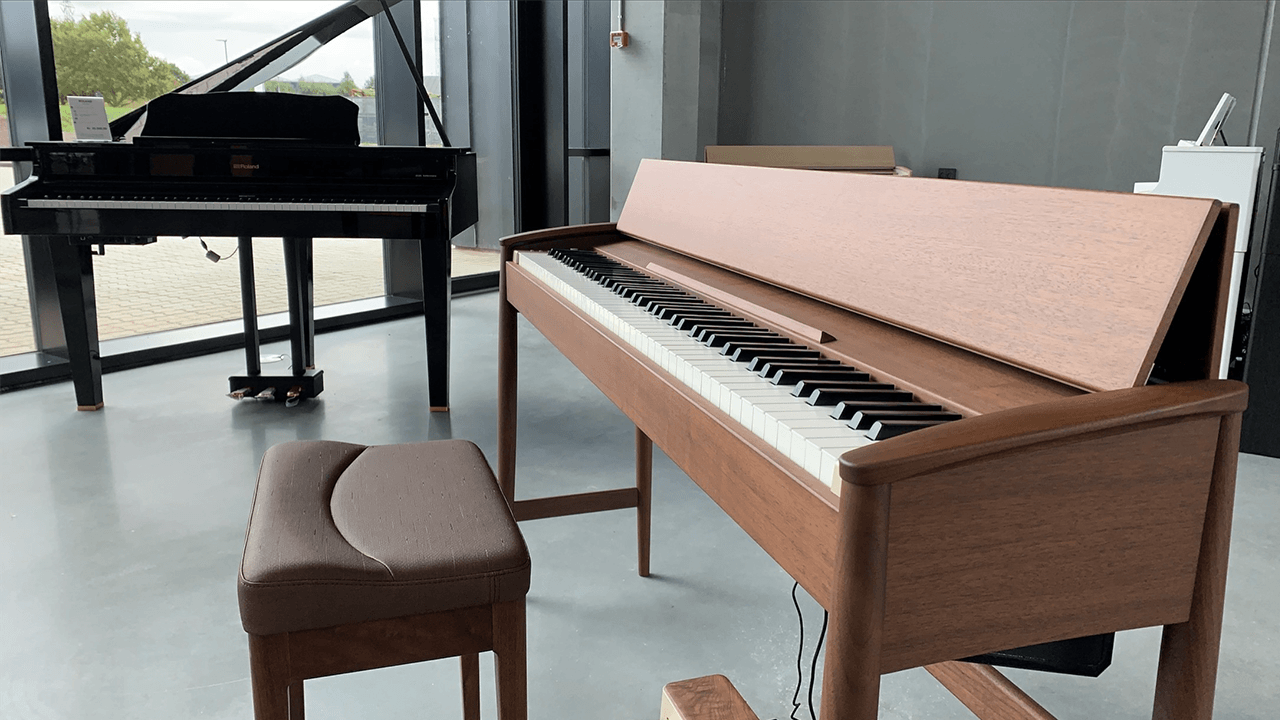 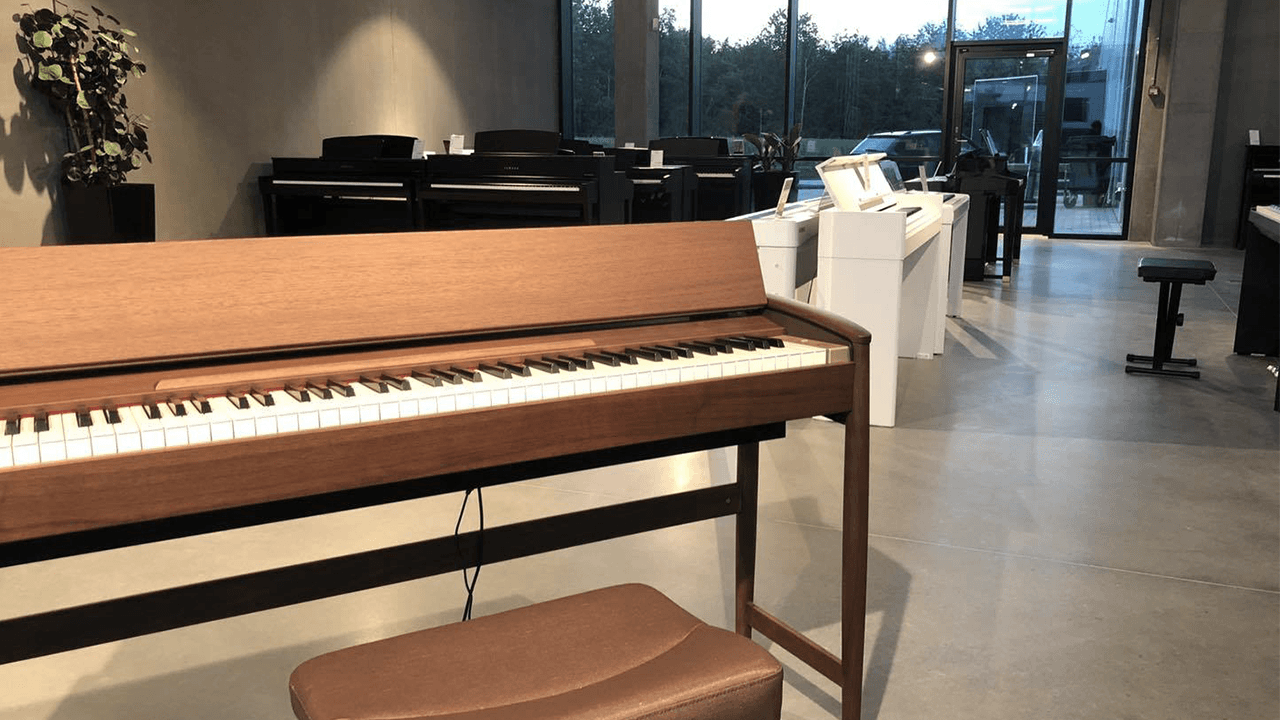 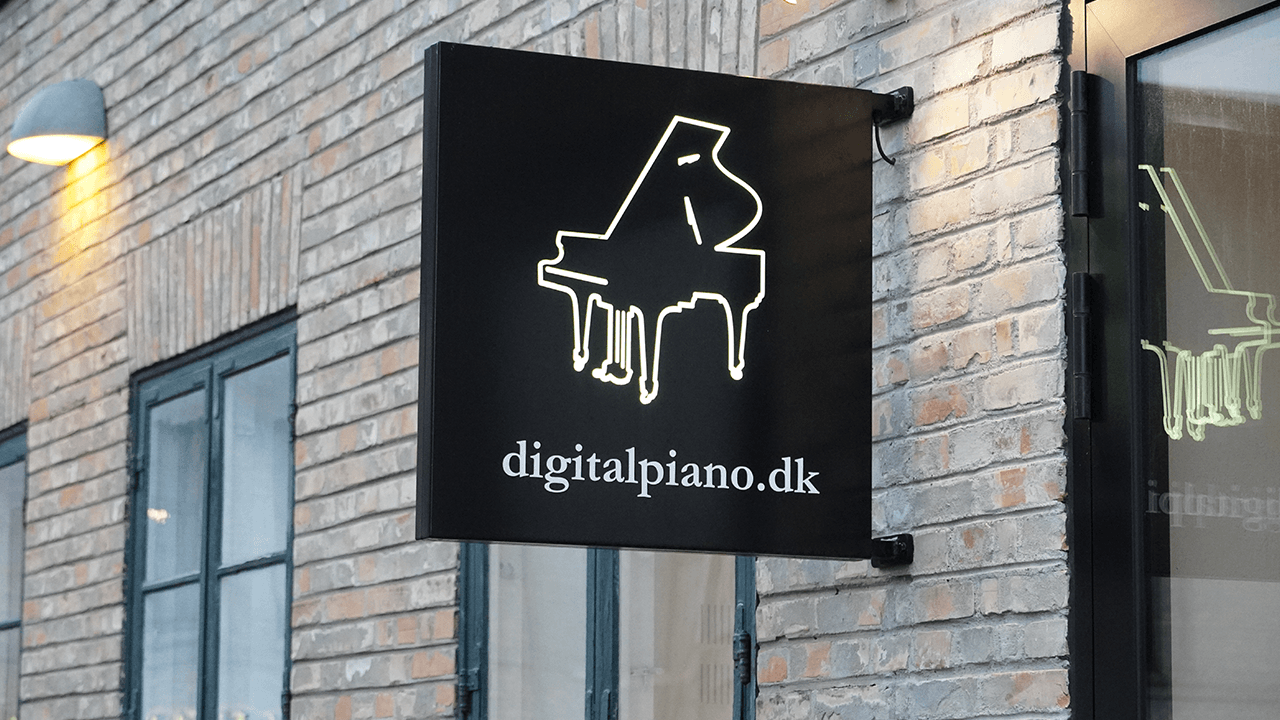 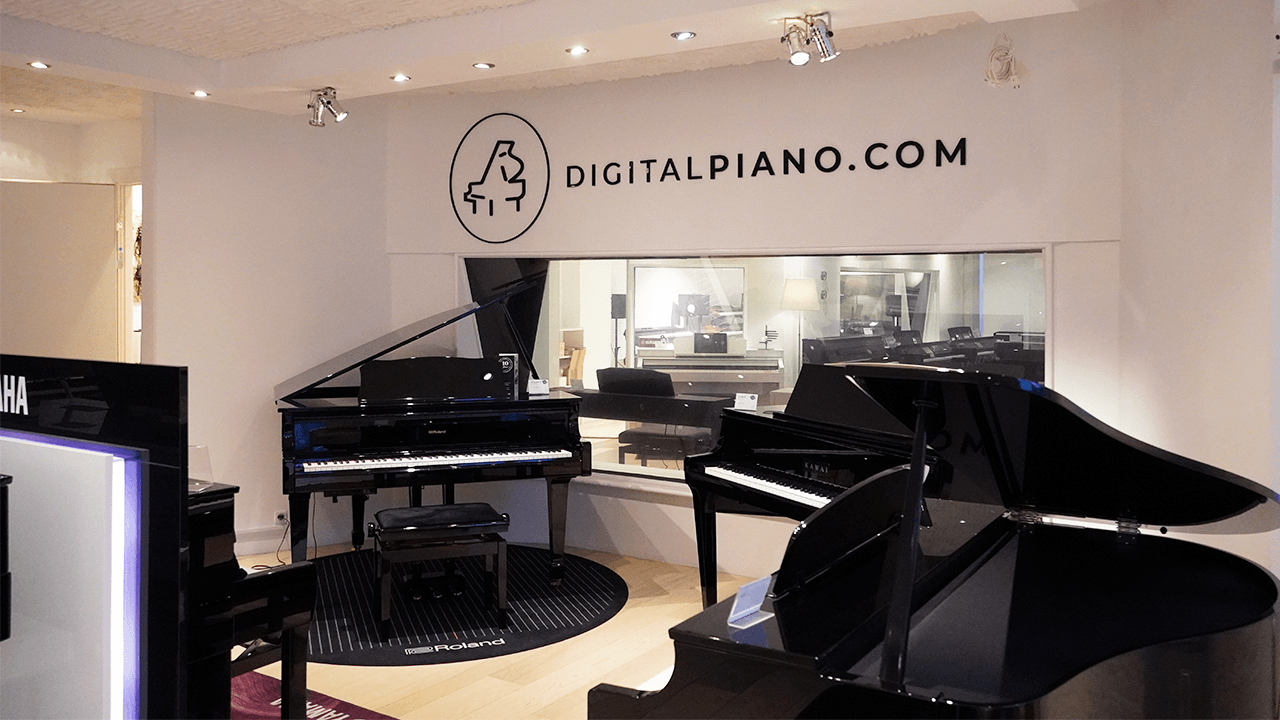 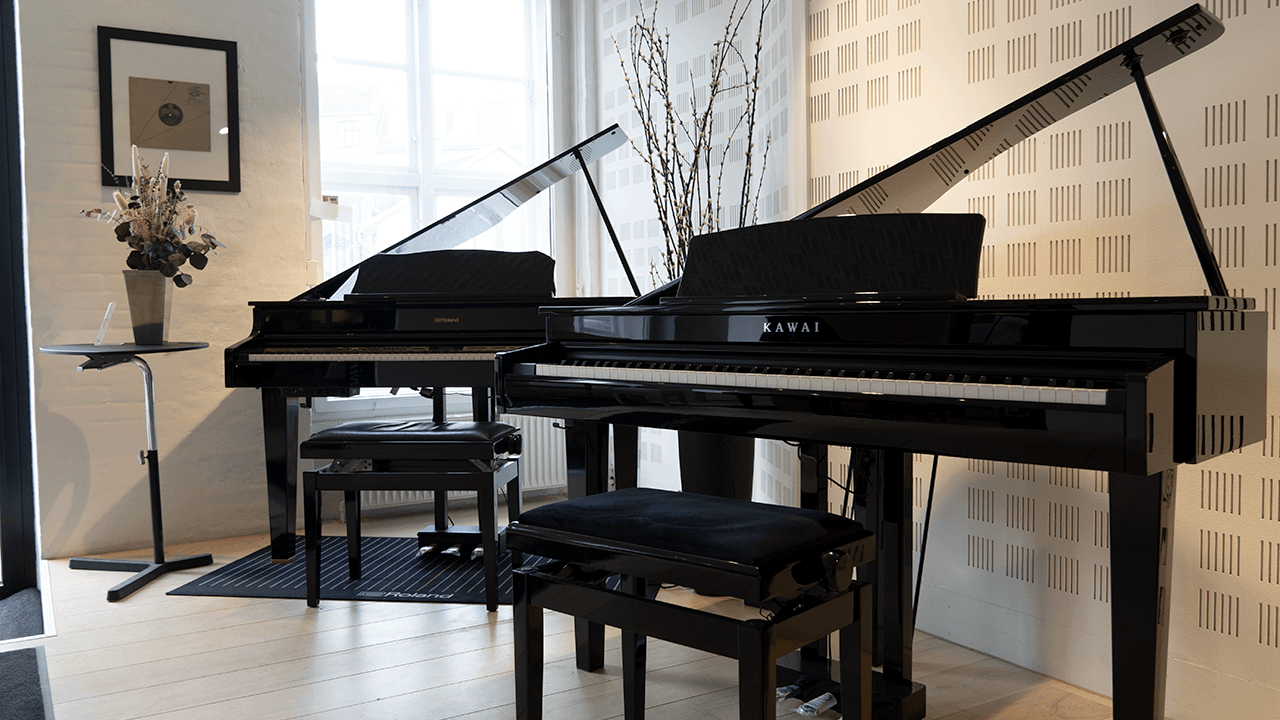 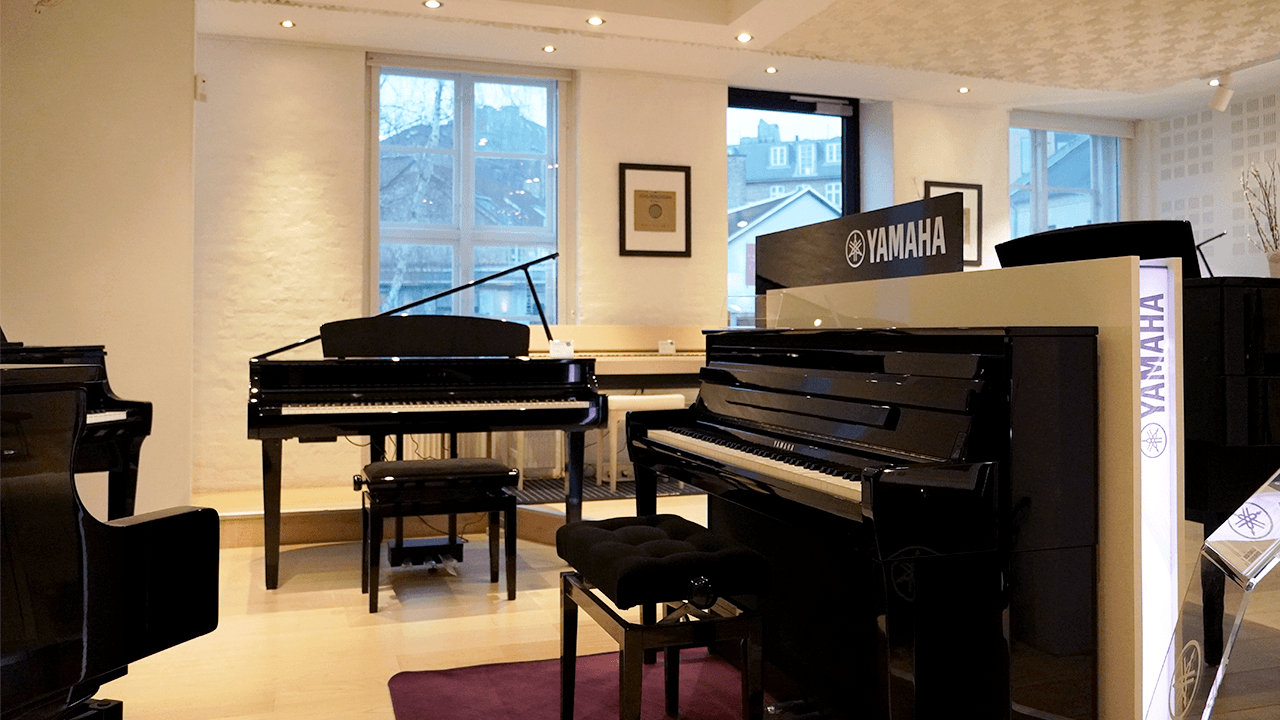 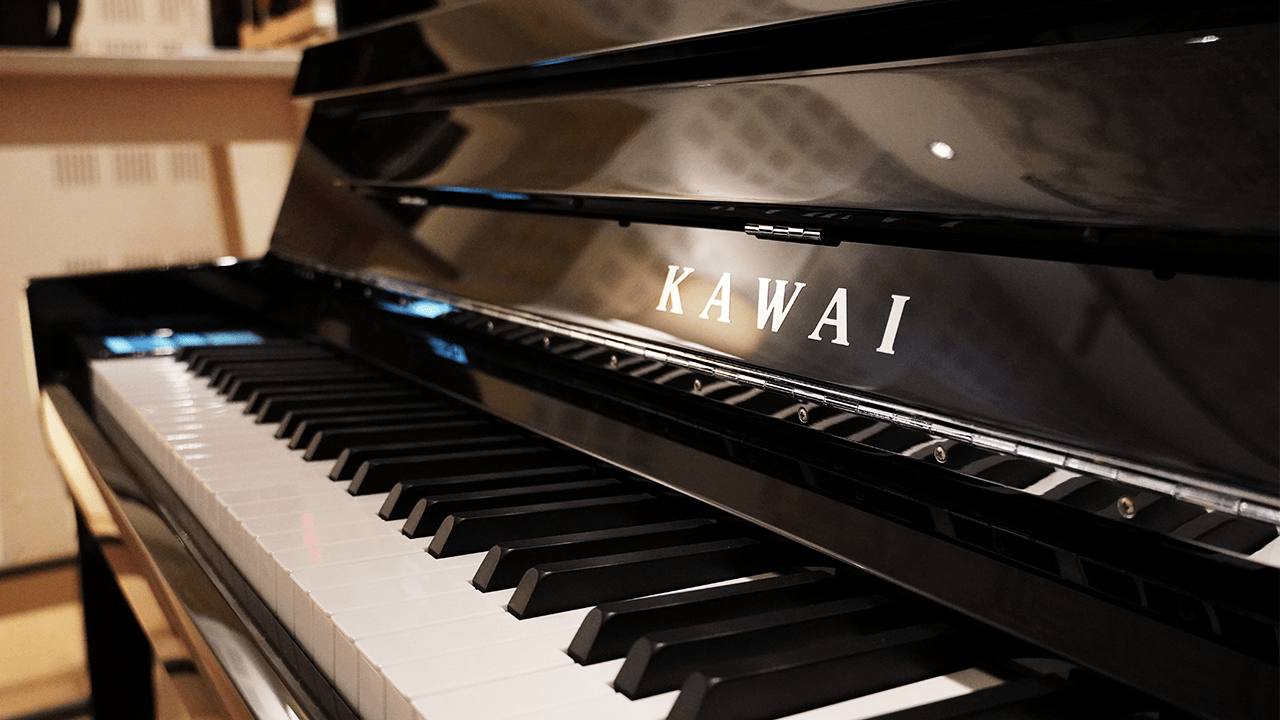 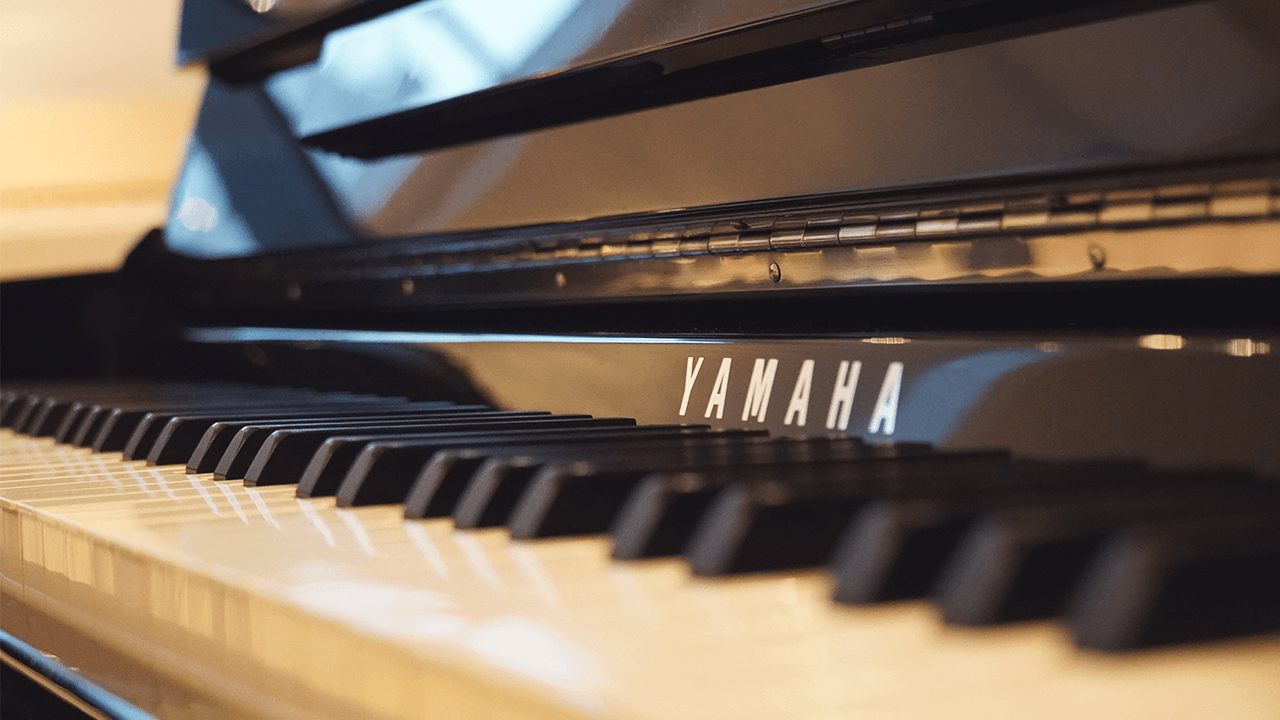 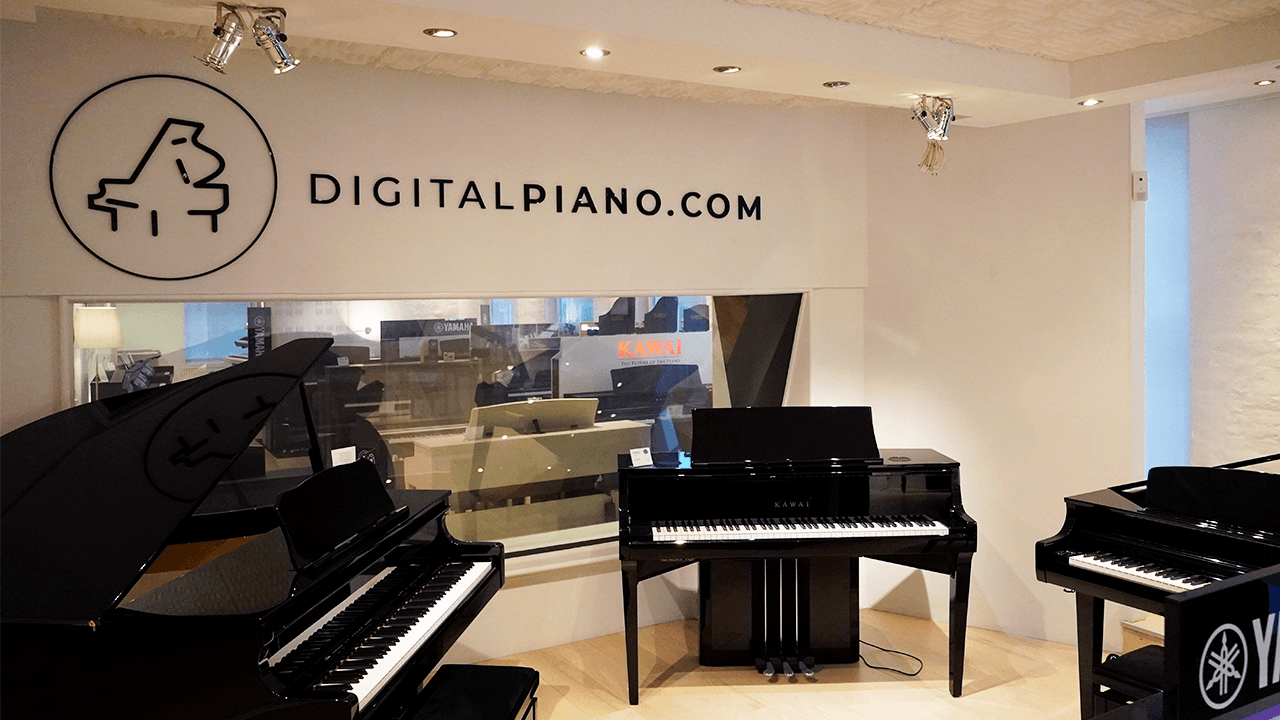 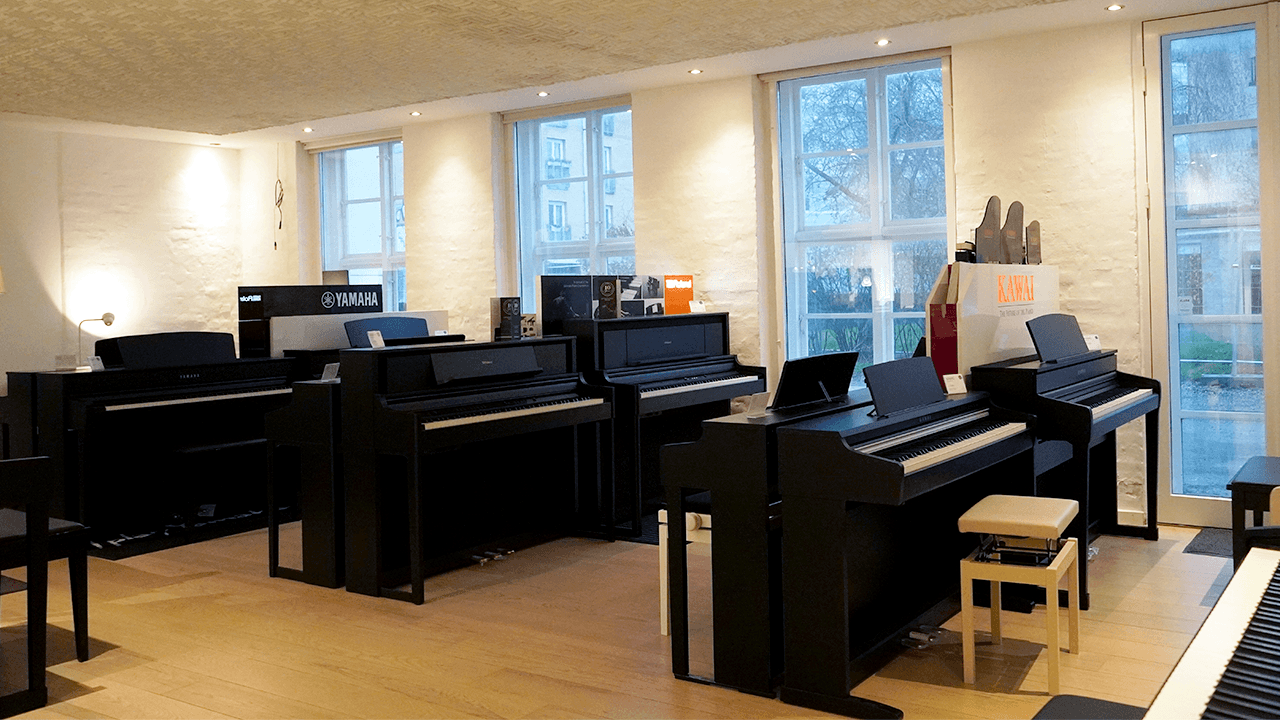 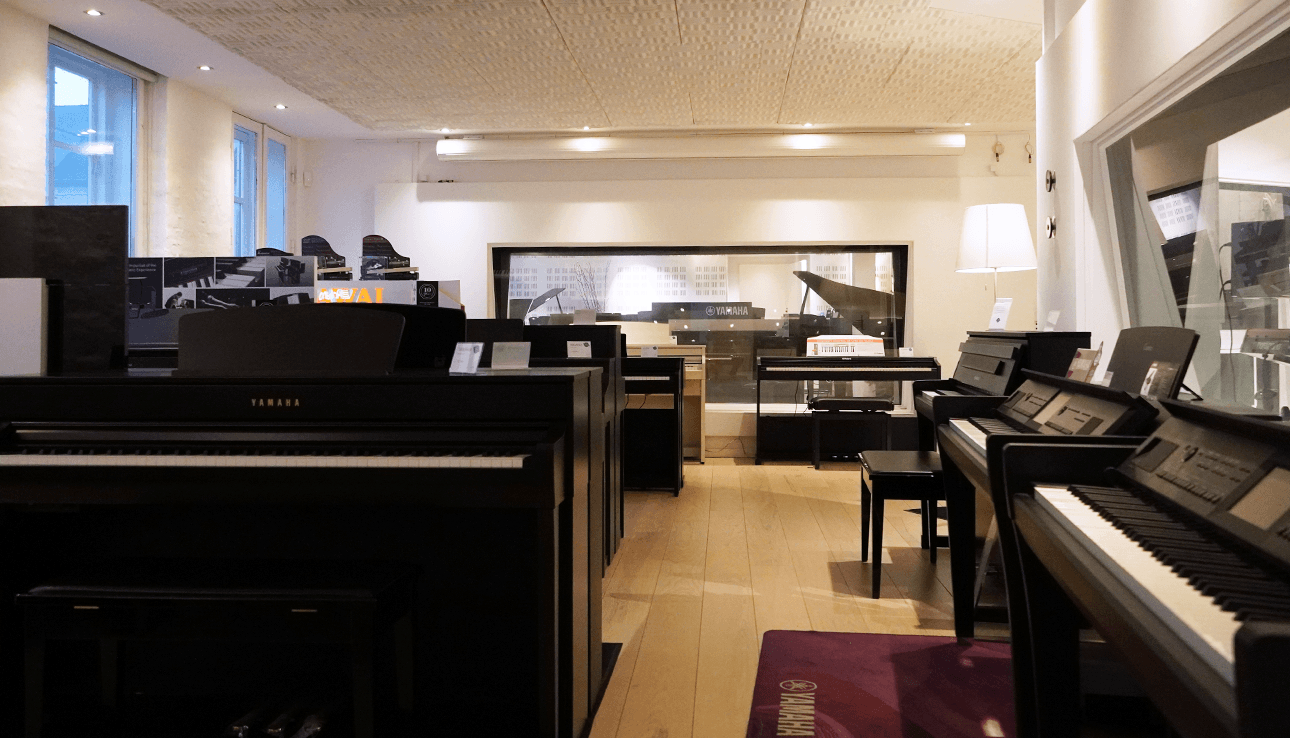 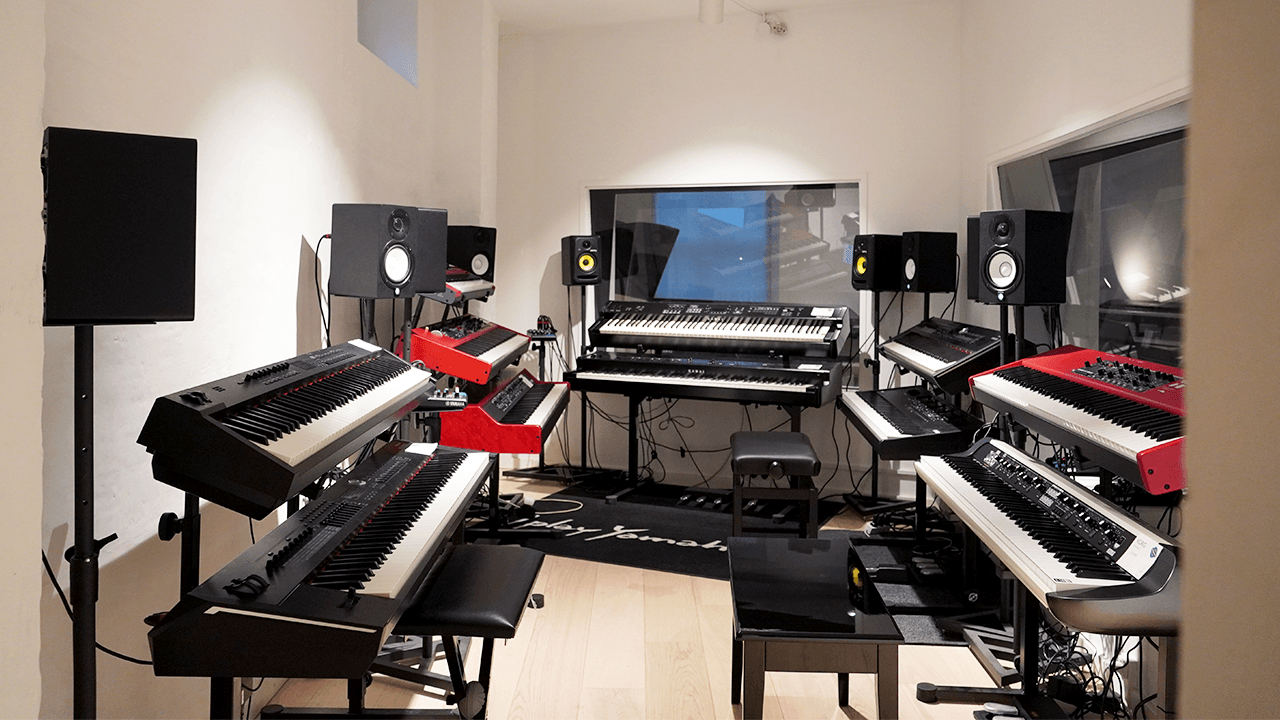 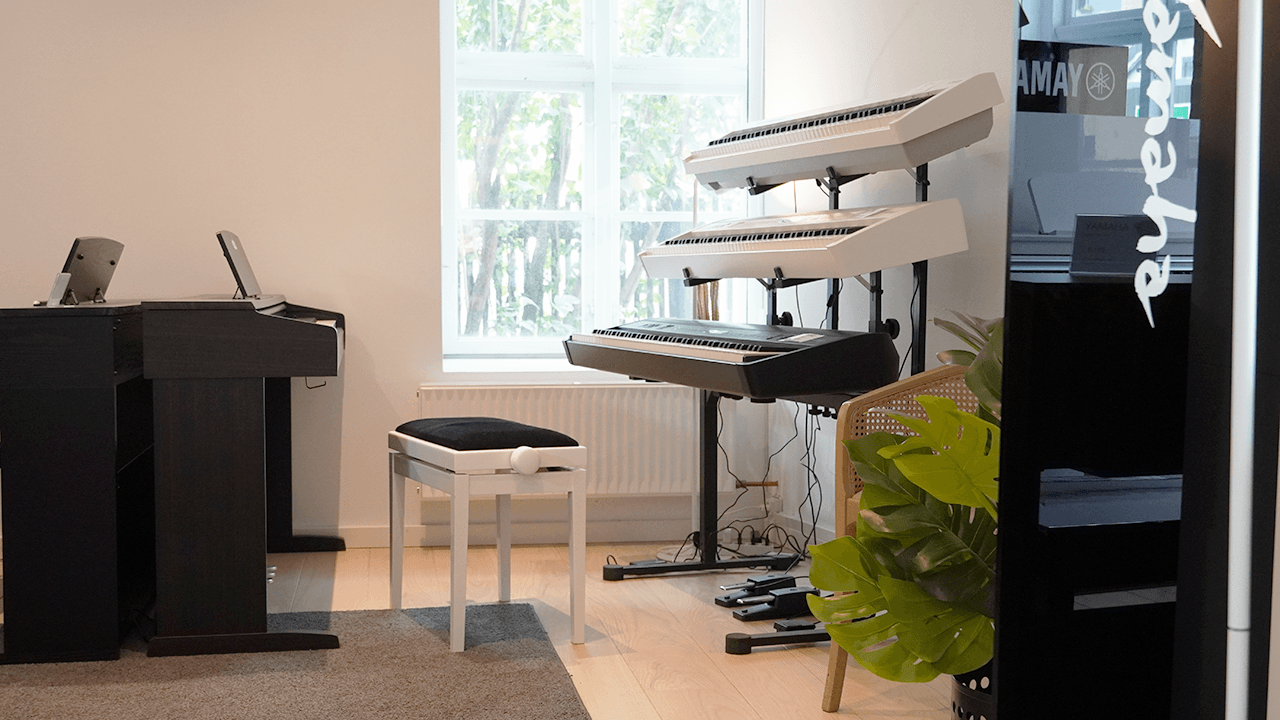 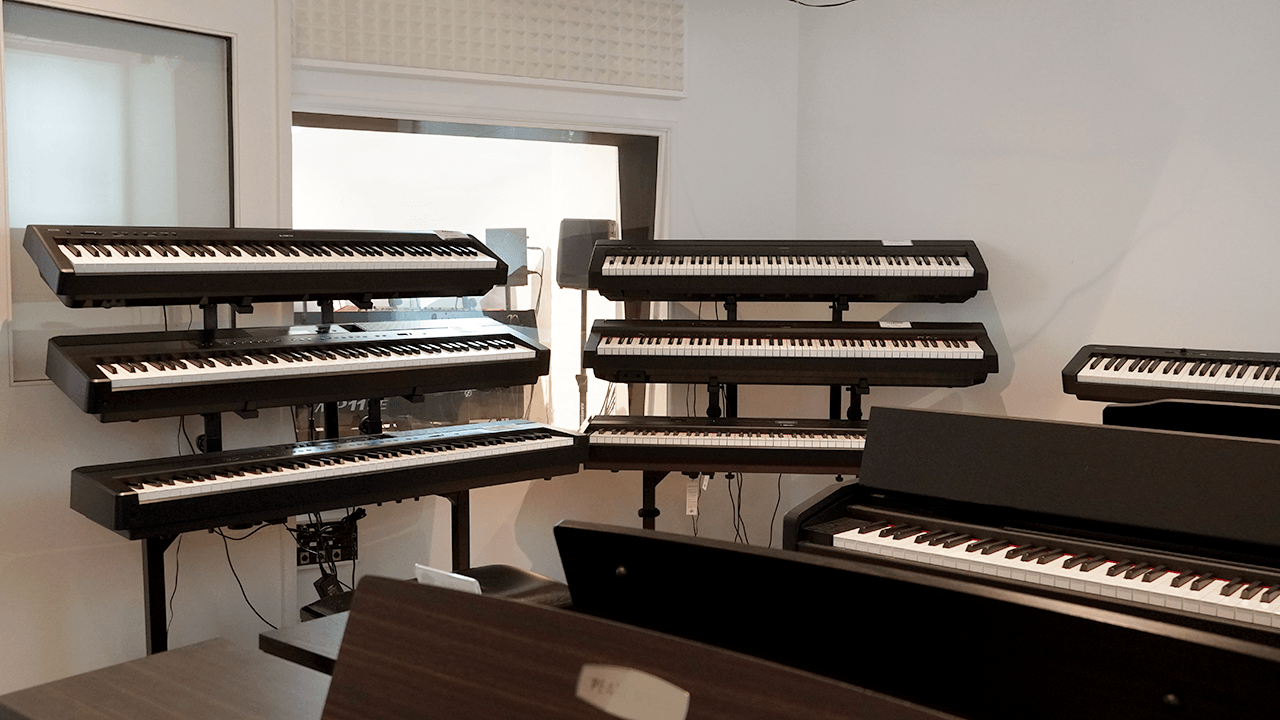 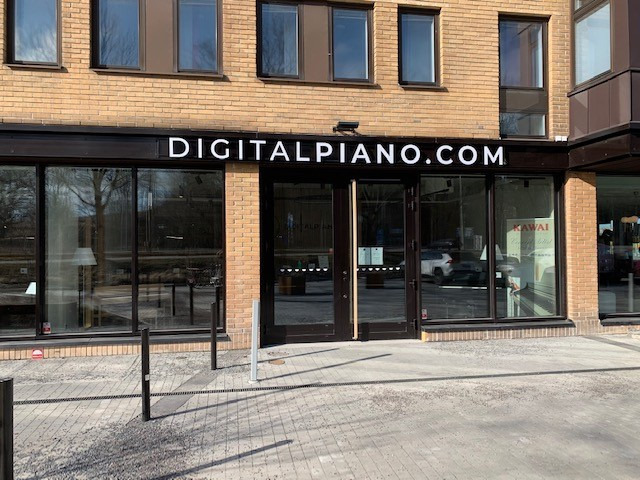 We also offer online meetings through Confer With. For such a meeting the only thing you need is a phone or a computer with access to the microphone, and then you can sit at home and get the same experience as if you were in the store. Locate the icon on the screen.

Kawai’s latest CN series digital pianos provide a realistic full-sized keyboard, beautiful grand piano sounds, and headphone jacks that allow silent practise at any time of the day. These affordable instruments also offer a variety of inspiring features suitable for everyone in the family, and have attractive cabinet designs that will complement any room. The new CN series from Kawai – experience music, together.

The CN201’s acclaimed Responsive Hammer III keyboard action has been developed to recreate the touch feeling of playing a Kawai grand piano.  Each key is authentically weighted using metal hammers which are ‘graded’ (i.e. slightly heavier in the bass region, and lighter in treble) just like an acoustic piano.  These weights also allow released keys to return to their original position without the aid of springs, resulting in a smooth, natural playing experience.

The chassis of the action mechanism is produced using reinforced materials that ensure the keyboard will remain rigid and stable when played with force.  In addition, a series of felt-lined rubber cushions absorb movement energy from the keys and hammers, helping to reduce unwanted ‘thump’ noise, and earning RHIII a reputation as one of the quietest digital piano keyboards available.

The Responsive Hammer III keyboard action features Kawai’s authentic Ivory Touch key surface material, which possesses an attractive matte finish that is smooth but not slippery. These characteristics are not only beneficial in aiding finger control, but also contribute to the overall impression of playing a high quality, authentic piano.

In addition to grade-weighted hammers, the Responsive Hammer III keyboard action also incorporates counterweights embedded within each black and white key. As with an acoustic piano, these additional weights help to balance the touch of the keyboard during pianissimo passages, while providing a feeling of greater substance and solidity when playing with force.

As the most authentic digital piano keyboard action in its class, Responsive Hammer III even reproduces the 'let-off' characteristic of acoustic piano actions. This subtle 'notch' sensation can be felt when playing the keys of a grand piano very gently, and may be used by experienced pianists to aid control when playing pianissimo passages.

The Sound of a Grand Piano: Two world-class instruments

Earning a reputation as the ‘premier pianos of Japan’, Shigeru Kawai instruments grace the stages of concert halls and musical institutions throughout the world, and are prized for their outstanding tonal clarity and exceptional dynamic range.

The CN201 captures the magnificent tone of the flagship Shigeru Kawai SK-EX concert grand piano.  This peerless instrument is hand-built by Master Piano Artisans at the Shigeru Kawai Piano Research Laboratory in Ryuyo, Japan, and widely regarded as one of the finest instruments in its class.

In addition, the CN201 also features the distinctive sound of Kawai’s highly acclaimed EX concert grand piano, which has been selected by professional pianists in such prestigious events as the Chopin, Tchaikovsky, and Rubinstein international piano competitions, among others.

Both the SK-EX and EX are faithfully reproduced with full 88-key sampling using advanced Progressive Harmonic Imaging™ sound technology, to establish a new standard in digital piano tonal quality, and allow musicians to appreciate the contrasting properties of each.

The rich, expressive sound of the SK-EX and EX concert grand pianos is at the heart of the CN201, with all eighty-eight keys of these world-class instruments painstakingly recorded, meticulously analysed, and accurately reproduced as high-fidelity digital waveforms.

Recording each key individually in this way – as opposed to stretching the same tone over several different notes – preserves the grand pianos’ unique harmonic character, and guarantees that the sound heard when playing any one of the CN201’s weighted keys is a faithful representation of the original acoustic source.

When playing a fine piano, the amount of pressure applied to the keyboard affects not only the volume of the sound produced, but also the unique tonal character of each note.  Therefore, in order to construct a realistic acoustic portrait of each grand piano, not only is each key recorded individually, but also at a wide variety of different volumes, ranging from gentle pianissimo to thunderous fortissimo.

Variety beneath your fingertips

Alongside the classically voiced SK-EX and EX grand piano sounds, the CN201 also showcases a selection of Jazz, Pop, and Modern variations suitable for a range of musical genres.  A traditional Kawai upright piano sound is also included, for pieces that suggest a feeling of nostalgia, or call for a slightly more intimate tonal character.

The knowledge and skill of an experienced piano technician is essential to bring out the best of a fine acoustic piano. In addition to tuning each note, the technician also performs numerous regulation and voicing adjustments that allow the instrument to truly sing. 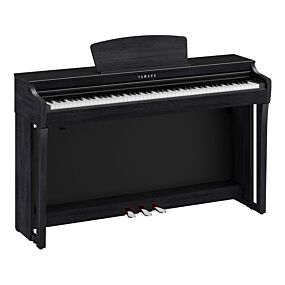 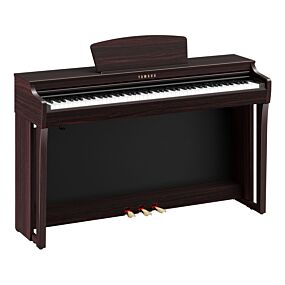